Power, Transport, Airways etc are classified as Network Industries. Energy orTransport Industry across the world is characterized by 2 or 3 features. One is that its investment scales are very high. That is exactly why only state enterprises dominated this sector for a while. Everywhere in the world the state enterprises dominated until and unless the production possibility frontier, ie the units of production possible on a unit of input, was breached and the capacity built on state capital is insufficient to meet the demand of the sector. In India also the same thing happened by the year 2000. Today more than 50 to 55% of Generation is done by private Gencos. The base value of this is that, he who holds the electrons will control the money. You are generating the electron and you are selling it. World over, network industries are under specific pressure because they need large quantum of capital, they can only work against several constraints including the constraint of production and their margins are always very thin because the product they produce are mass consumed. That’s why Govt would consider airfares to be low, train fare is highly regulated. Naturally all these industries will be controlled by regulations, whether done by Govt or done by statutory regulators. 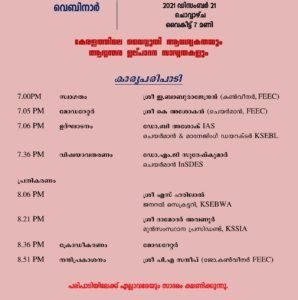 When we talk about Energy Transition it is important to look at it interms of Energy Density. A high power density technology like a Thermal plant or Nuclear plant work at about 102 per sq. meter. Most inefficient way of densifying power is biofuels which works at about 10-1/m2. The area where a thermal plant is operating it can work at high efficiency. For a square meter it can generate so much of watttage. If you take the case of a dumping yard (waste to energy plant) land required to generate so much power will be several fold. The level of biofuel plant is to the order of 10-1 or 10-2 where as a thermal plant is at a level of 102

Total capacity of irradiance possibility across the globe is 17 Terra watts. Actually tapped is 0.03 watts/m2 only. The technology to capture this is not available now. Kerala is having 2000MW of hydro. Hydro is reasonably efficient technology. It works at the rate of 101/m2.(moderate efficient technology). Conventionally power is being assessed in terms of cost of production. You will have to densify it without damaging your environment. Second point is: The denser production of power is more polluting and are getting rejected across the world. The cost of production including decommissioning cost of a nuclear plant will be very high and not justifiable. If you have to run the Thermal plant to the emission norms they might get costlier. Costlier to the extent of 4Crore/MW. Thermal will get costlier by at least Rs 2/unit.Densifying technologies will be getting replaced by less densifying technologies which will take more space. (Solar takes plenty of space – its spread is more)You will have to use less and less densifying technologies which will need fairly large capital inflows.We have shortage of power in 20% of the 96 time blocks in a day in the power market. The market at that period is entirely different from the market when we are having surplus.There for all possibilities of investment also change. The weighted average between all the sources determine the rate of investment that will happen. Desert Tech is a project which EU is piloting. Largest production area of the solar is the desertified lands. Develop the sub-Saharan desert and bring Electricity to Europe by laying cable through the strait of Gibralter. Lesser dense, less polluting, high capital, to be utilized for greening the Grid is the global direction. This will call for a substantially strengthened and intelligent grid.

At the moment the renewables are forming about 10 to 12% of the grid capacity, the grid requires a lot of accustomisation to it because it is not a densified power which is injected and withdrawn at will. It is something which prosumers are going to do at several thousands of points and therefore inducting in to the grid or taking away has no SCADA support. So you can only infer its absence rather than detect its presence. People have done this to the extent 40% of renewable. Sooner or later they are also discovering that they need informatics to match that scale. This is an extremely crucial thing which Kerala also has to do adequate policies in presence where large solar plants are sufficiently rich with data which the Discom or Data analyst has access to real time, otherwise the grid predictability will be general out of control. The strength of informatics will be going to decide whether it will be able to play in the field of diversified and segregated small scale production.

CEA’s, expectation of a huge jump in demand has been belied. Growth of demand has been a bit more optimistic than its usually ends upto be. In general we have gone 2 to 3% behind what CEA would predict for us. If we factor that micro grids and smart grids are going to be very prevalent we have to be very very clear about our project which densify power. Kerala has another issue coming up. One is uncertainty in the climate scale. When you jump in to solar investment one has to see that the climate factor has become a bit more unstable for Kerala. A rainfall which is extending up to 7 months or more than that so your capacity factors might be under stress at the end of the day. So there is a case for firmer Power. But in the case of firmer Power, water is behaving slightly odd. Highranges are eco fragile, western ghats have its own tension. So these factors come into play. Another important micro factor is that Kerala is one of the states which might actually go in to a population recession in the Indian states by 2050. If you think that population, employment and growth are the primary factors of a very high energy demand, that could also hit a plateau in the next 20 years. You cannot assume 7% growth in to 2050. We need to work more with demographers to understand as to how this is going to affect. So there are few factors that KSEBL or state planning apparatus have not yet get a grip on. I personally think that it is sound to promote solar and wind which Kerala can because these technologies less dense are friendly with the environment and also supplement it with requisite firm power to bridge the daily gap. We also need to broadly get out of the idea that Kerala will produce majority of its power which it needs in the coming years. It is simply nota dvisable because our demand can contract as well or if not contract grow at a slow pace. We have to move largely from long term contracts towards medium term contracts and more efficiently playing in the real time market. At this point of time we may have to go for 5-6 year contract, looking at the volatility in the demand that is happening. I don’t see that Industrial demand is not going to push the demand at a dramatic way. One of the largest demand placed with us is the K-Rail network which is coming in to play in the next 7 years. This project has several mile stone to cross to fructify.

I wish the webinar all the best. I thought I will give you a slightly larger picture which deals with the difficulties involved with it. Specific details further speakers can take.